Who Was Cain's Wife? 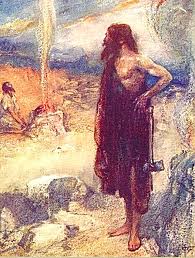 But the first man and ‘father’ of the entire race was Adam and Eve was his wife. It was through Adam the first man - the primogenitor of the entire human race, through whom every man and woman that has ever lived (including both Cain and his wife) were descended. Sin came through Adam, and as a result sin became the inborn nature of every single member of humanity.

Others argue that there must have been other people and races living at the same time as Adam and Eve for Cain to be able to marry a wife. But the Bible clearly tells us that God created one man, and from that one man all the nations of the earth were descended.

Clearly if we believe the Bible to be the inerrant word of God, then we can say without hesitation that Cain’s wife would also have been his sister – and a female child born of Adam and Eve. Although we are not told her name, nor any other details of her, we know that Cain had descendents by his wife (who could only have been his unnamed sister), as seen in the genealogical line of Cain as recorded in Genesis 4:17

Some however consider that Cain was going against God’s law in Leviticus 20, where a man is forbidden to marry a near relative - his sister. But the Levitical law was not for those that lived before God gave the Law to Moses – that Law was giving to the Children of Israel alone, over 2000 years after Cain lived.

Adam lived 930 years and in Genesis 5:4 we read that at the age of 130, after the birth of his son Seth,after which “Adam had sons and daughters. So all the days that Adam lived were nine hundred and thirty years; and he died” No doubt from the ages of those recorded in Genesis 5 and the age they were when they had children, Adam (and indeed all those that lived before the flood) were fertile and producing offspring into a ripe old age!