What is Christian Apologetics?

Quick Answer: Apologetics comes from the Greek word “Apologia” which means defense. It is giving a reason or defense for the Christian faith. 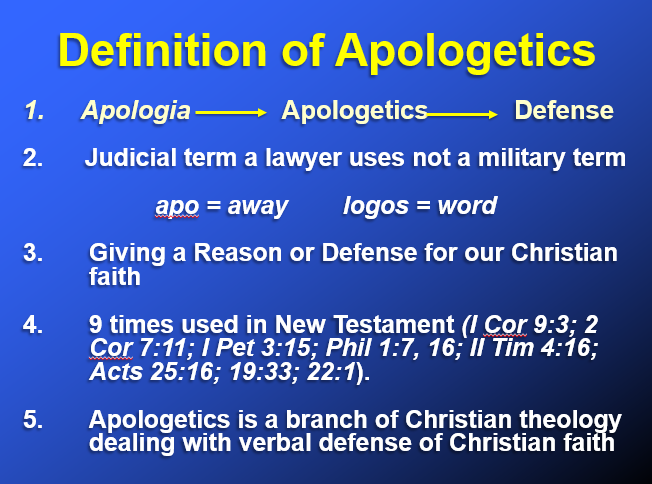 Apologetics is not a military term but rather it is like a defense a defendant makes before a judge. The word “Apologia” is found in 1 Peter 3:15 and translated “reason” - “always be ready to give a reason for the hope that is in you.”  Plato used the word apologia to describe Socrates defense in the Athenian court. Apologetics is not grabbing people and throwing them against the wall, but rather a reasoned argument like a lawyer would do in court, it is a conversation we have with people.

If we look at the makeup of the word apologetics, it is made of two Greek words, Apo and Logos. The word ‘Apo’ means ‘away from’, and the word ‘logos’ means word – that is apologetics is speaking away a word or accusation that comes towards Christianity.

1 Peter 3:15 says that we are to “always” be ready to give an answer to “everyone” who asks. If we are always to be ready to give a defense we may as well make it a good defense. For people have good questions and Christians have good answers, in fact they have the truth, and there is no need to be scared to answer anybody. If you don’t know the answer on the spot, just say you will go and find out what it is.

The apologist is to be bold in God but not bold with an attitude. We never want to win the argument but loose the person. That’s why we are to speak in humility with meekness.  There are two aspects to apologetics, a negative and a positive aspect.

From the Bible we can find certain aspects regarding the nature of apologetics:

1. It is giving a reason for our hope

1 Peter 3:15 - always be ready to give a defense to everyone who asks you a reason for the hope that is in you, with meekness and fear

2. It is Defending the Gospel

Philippians 1:7 - I have you in my heart, inasmuch as both in my chains and in the defense and confirmation of the gospel,

3. It is Answering Every Question

Colossians 4:6 - Let your speech always be with grace, seasoned with salt, that you may know how you ought to answer each one

4. It is Contending for the Faith

Jude 1:3 - I found it necessary to write to you exhorting you to contend earnestly for the faith which was once for all delivered to the saints

5. It is Reasoning with Unbelievers

Acts 17:17 – Here we have a living example of apologetics. Paul didn’t just proclaim the gospel but reasoned with the Jew and Philosophers. “Paul reasoned in the synagogue with the Jews and with the Gentile worshipers, and in the marketplace daily with those who happened to be there.”

The Negative Aspect to Apologetics: This is tearing down arguments that come against Christianity (2 Corinthians 10:5). When the accusations come we are to be ready to answer them. All action is a result of an idea which comes into our mind; we need to be critical about what ideas we put in our minds. Thoughts always result in actions and we can just look at history to see that. For example Hitler first wrote Mein Kampf and then acted out what was in that book. Proper evaluating new ideas and tearing them down if necessary is the negative aspect of apologetics.

The Positive Aspect to Apologetics: In this sense we are giving positive information to prove the reasonableness of Christianity. For example giving evidences why God exists, why the Bible is reliable and Christ is risen. It was Aristotle who said an “unexamined life is not worth living”, in the same way an unexamined faith isn’t worth believing. We can positively present proofs for the truthfulness of Christianity, and reasons why they can put their trust in Christ.

Apologetics has been described as pre evangelism. Apologetics doesn’t save anyone but it breaks down walls and gives positive reason why Christianity is true. Paul “reasoned” (Acts 17:2-4) on Mars hill “explaining and proving.” It says some were convinced as Paul was persuasive in his reasoning.

Almost half the world is non-theistic. There cannot be the Son of God, Acts of God, and Salvation from God if there is not a God. Therefore to people who don't believe in God we first need to pre-evangelize them, and prove that God exists. 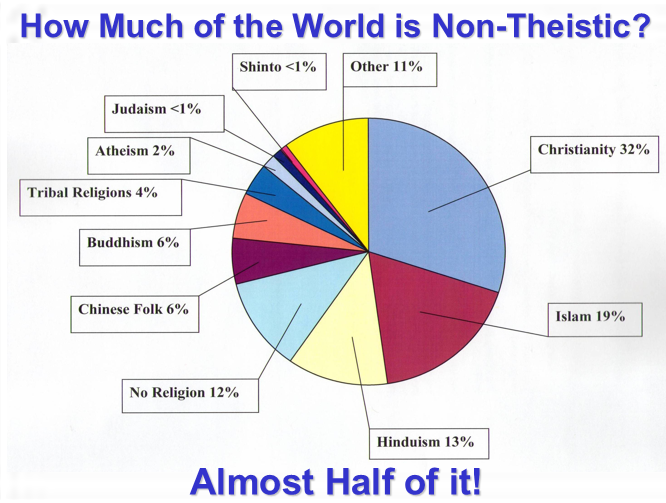 The Limits of Apologetics

Apologetics cannot save anyone.  There is a difference between faith that and faith in.

Faith that is the area of apologetics, it is proving that God exists, using objective arguments and focusing on the mind. Faith that is always the area of pre-evangelism and is done sometimes depending on the intellectual questions people have.  The focus of “faith that’ is how people perceive reality, the focus is the mind using general revelation.

“Faith in” is the area of evangelism when we give the gospel. This is something we should do all the time.  The will is used when we put faith in something.

The Seven Laws of a Good Apologist

Dr. J.W. Montgomery sums up what an apologist is, in his accroynym ANSWERS 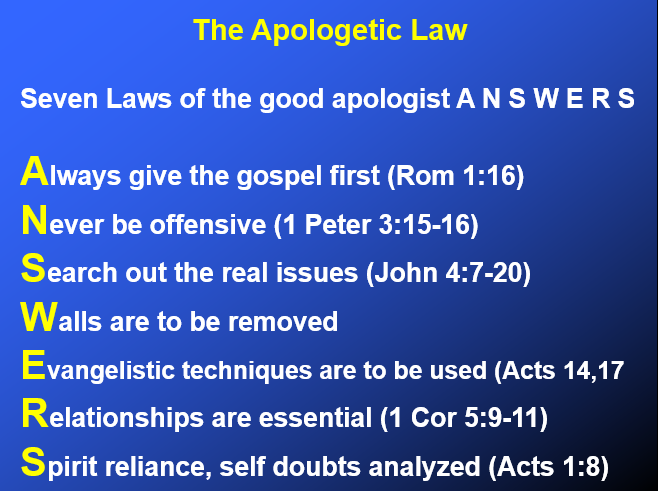