The Reasons Why all Truth Claims are Absolute 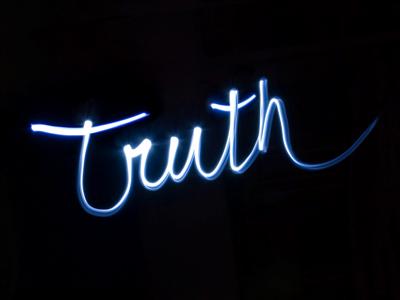 As  Pilate stared at the Truth Himself, Jesus Christ,  he posed the question, “what is truth” (John 18:38).  Today people are not just asking what the truth is but also stating that  truth cannot even be known.  In a world which has pronounced the death of truth all that remains is subjectivism, personal opinion, and skepticism. All barriers to truth, however, end up to be self defeating or dogmatic. When these barriers are removed we are able to access the absolute truth which shines down on everyone whether they like it or not.

After showing the importance of the truth question we will first define truth as absolute, showing that there is a “reality” that is true for all people, at all times, and in all places. We will then remove the philosophies standing in the way of knowing  truth.  It is vital that we are able to access truth because if the Bible is true it makes statements which carry eternal consequences. Showing truth is absolute and knowable is the first step to proving the truthfulness of Christianity [1].

The way people live their life shows the importance of knowing the truth. Even if someone has not considered the question of whether truth is absolute and knowable, they demand to be told the truth in everyday life; demanding accurate food labels, honest doctors, and functioning court systems.  For example there are consequences to pay for not heeding a warning sign saying “Keep off the ice”, truth is to be ignored at people’s own peril.  Society, therefore, cannot function without absolute and knowable truth.

If there is no truth then all that remains are opinions.  There is no reason for soldiers going into battle to listen to the briefings of their superiors; in an absence of truth why should they believe such information?  Many soldiers however died in World War Two for not listening to the truths their commanders presented.  Just as a compass is used to point us in the right direction, without truth we cannot make right decisions, only good guesses.

Christianity makes absolute truth statements that Jesus is the only way to be saved. If you cannot show truth is absolute and knowable then why would someone believe the words of Jesus when He said, “I am the Way, the Truth and the Life, no one comes to the Father except through Me” (John 14:6). Only after establishing the proper nature of truth,  can we make truth claims evaluating Christianity and showing why it is true.

Truth is finding out what is real and what is not real, or in other words telling things like they are. Truth by definition is narrow - two plus two always equals four and not any other number. If someone makes a statement about reality then that statement needs to be tested against reality to see if it is true. If that statement corresponds with reality it is true and if it doesn’t correspond with reality then it is false [2] . Conflicting statements about reality cannot both be true at the same time and in the same sense.  We will show how this truth is both absolute and knowable.

Absolute truth means that true things are true for all people, at all times and in all places and therefore all statements are absolute statements. We will show anyone who denies this in favor of relativism misunderstands the meaning of absolute truth.

Truth is True for All People

Truth is unchanging and not determined by anyone’s belief but rather existing independently,  it is objectively true for all people.  People can have true or false beliefs and a belief is shown to be true or false when it is tested by what is present in reality. It is not beliefs which make truth, but rather truth itself, when apprehended, gives rise to true statements. For example believing the earth is flat doesn’t make it flat, it always remains a sphere shape.  Truth therefore is absolute for all people.

Truth is True at All Times

Truth is also true for all people at all time,  and  is not invented but rather  discovered during the passage of time. The law of gravity existed before Isaac Newton discovered it - he didn’t invent it because it had always existed. The law of gravity is true for the person who jumps out of the top floor window, regardless of his belief he will fall to the ground. Truth remains true whether it is known or not. It is our responsibility to discover that truth and make it known. Truth therefore is absolute at all times.

Someone may object and say that truth cannot be unchanging because if that was the case, we cannot have any new truths. For example, on January 2009 Obama became President of America. However there is a distinction between truths new to us and truths new in time. New truths  come into existence regularly at a certain point in the passage of time but were false before that point in time.   After January 2009 it will always be true that Obama became President of the United States, however before that day the statement would not have corresponded with the fact and therefore would have always been absolutely false.

On the contrary, an example of a truth that is new to us would be the discovery of gravity, we just discover its existence. This didn’t become a new truth when we found it for gravity was always acting on people and keeping them from floating into space. When we find a truth new to us we become aware of the truth’s existence, in this case gravity. We can have new truths – both new truths to us and new truths in time are absolute truths – and truth, therefore,  remains absolute at all times.

Truth is True in All Places

Truth is not only true for all people and at all times but also in all places however diverse the culture and climate. Both in China and America truth remains the same. A relativist may object and say that comparing conditions in different locations destroys absolute truth, for example it is warmer in Egypt and colder at the North Pole.

This objection  fails because you have to ask the question, warmer than what? It is absolutely true for all people, in all places, that on 30th December 2008 it was colder at the North Pole than it is in Egypt.  All pleas that comparisons are relative fail when you ask what they are being compared against. Every statement is an absolute statement and remains true for all people, at all times and in all places.

We have shown how all truth is absolute, at all times, in all places and to all people. The next step is to show how all philosophies which deny that truth can be accessed, fail. (see this article on why barriers to truth fail)