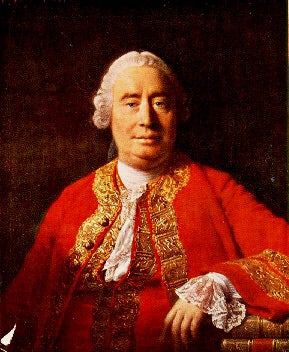 During the 18th century (European Enlightenment), a philosopher named David Hume penned his skeptical views concerning reality and his disdain for the miraculous. Hume claimed that there are only two kinds of meaningful statements:

2) statements that are ‘matter of fact’ (empirical – ‘verifiable by experience or experiment’ or factual).

Of course, all statements about God fall outside these categories, making knowledge about God impossible. This argument is self-defeating. If the only meaningful statements that exist are ‘relation of ideas’ and ‘matter of fact’ statements, then Hume’s statement is disqualified because it does not fit under either one of these categories, and thus is meaningless.

Hume on Cause and Effect

Hume also claimed that ‘cause and effect’ can only be believed in but cannot be known; causality cannot be known because it has no empirical grounds to be known. Hume claimed that things happen after other events but are not really caused by them (e.g., the sun rises regularly after the rooster crows but not because the rooster crows). Events or things, preceding or following, other events or things can only be determined by custom alone, but never by cause and effect.

Some events or things happen so often in accord with other events or things that we should believe they will happen again tomorrow (e.g., morning comes and the sun rises). Yet Hume claimed “all events seem entirely loose and separate. One event follows another; but we never can observe any tie between them”.

There are problems with the idea that all events are “entirely loose and separate”. The very statement itself, that everything is disconnected, implies unity and connection. If everything were unconnected, this statement would be impossible to make. The things we write and the things we say are all connected to the thoughts of our mind. So, the internal thought and the external action are connected and we are experiencing ‘cause and effect’ continually.

Doubting Everything is Self Defeating

Hume held the idea that the wise man should doubt everything about reality and suspend all judgments about reality. This too is self-defeating. Hume is making a judgment that we should suspend all judgment. In order to doubt all things, one would have to doubt ‘doubt’ itself, which would bring you back to certainty. Hume would have to be skeptical about his own skepticism, and doubt his own doubts. Why write philosophical books stating your views if the wisest course is to suspend all judgment and remain skeptical about reality? Obviously Hume was not wise according to his own criteria. Ultimately the skeptic is claiming that skepticism is the only view that should not be doubted, which is dogmatism.

Today, the philosophies of David Hume are still held by many secular philosophers, which in turn has influenced much of western thinking. This article (Hume, David) falls under the first proposition in the apologetic argument for Christianity. In order to establish that ‘Truth about reality is knowable’, one must first refute the philosophy of Hume, since he is the father of much false thinking in our culture today. Once the inconsistency of Hume’s position is revealed then much of the false thinking of western culture is faced with the fact that ‘Truth about reality is knowable’.