Is Jesus God? Did Jesus Ever Claim to be God?

Question: "Is Jesus God? Did Jesus claim to be God?"

Yes Jesus is God. He has the attributes of God, possesses the names of deity, does the works of deity, and is worshiped as God. His closest disciples recognized Him as deity as well as the enemies of Jesus. In fact the claims of Christ are so clear that the only option when considering what He says is that Jesus was either a Liar, Lunatic or Lord. A fourth option is that he was a legend but this is impossible as we can prove the historicity of the New Testament.

Is Jesus a Liar, Lunitic, Legend, or Lord.

Was Jesus a Legend? Legends take at least two generations to develop and with most of the New Testament written by 68 AD there was no time for any legend to develop. Even non-Christian historians like Josephus speaks about Jesus in his writings.

Was Jesus a liar ? Everything we know of Him discourages this option. When we look at the words and actions of Jesus, it is incomprehensible that someone who spoke of morality and truth was the greatest deceiver of history.

Was Jesus a lunatic? When we examine the life of Jesus He lived a balanced life, His conversation was reasonable and logical with healthy relationships with others. He doesn’t fit the profile of a lunatic.

“A man who was merely a man and said the sort of things Jesus said would not be a great moral teacher. He would either be a lunatic—on a level with the man who says he is a poached egg—or else he would be the Devil of Hell. You must make your choice. Either this man was, and is, the Son of God, or else a madman or something worse…”

Jesus was indeed Lord. And if He is Lord what will your response be, will you accept Him or reject Him ?

So next let’s look at the claims of Jesus to be God, and prove that Jesus is God. It’s important here to note the doctrine of the trinity. The doctrine states that there are three in one. That is there are three persons with one essence, God the Father, God the Son, and God the Holy Spirit all equally God."

How did Jesus claim to be God?

1. Jesus claimed to have absolute moral purity (John 8:46, 2 Corinthians 5:21). When He was called “good” in Mark 10:18 Jesus responded, why do you call me good, for only God is good. Jesus was agreeing with the man that only God is good, but at the same time awakening in Him that he is right that I am good, for I am God.

4. Jesus claimed to be the Jewish Messiah (John 4:25-26), and every Jew would know that the Old Testament teaches that the coming Messiah would be God Himself. In Isaiah 9:6 the messiah is called “mighty God.” At the trial of Jesus the high priest tore his clothes and Jesus was to be executed for blasphemy. The High priest knew very well that Jesus claim to be Messiah was a claim to be God. The reason the Jew’s crucified Jesus was because of His claim to deity - "you being a mere man, claim to be God" (John 10:33)

5. Angels are called “the Angels of God” (Luke 22:8-9), and the phrase “Kingdom of God” is found throughout the scriptures. The angels belong to God, however, Jesus said the angels and the kingdom are both His, “the Son of man will send His Angels and they will gather out of His kingdom all causes of sin and evildoers” (Matt 13:41)\

Jesus has the Attributes of Deity

Jesus has the names of Deity

In Isaiah 40:3 it says, “In the desert prepare the way for the Lord [Yahweh]; make straight in the wilderness a highway for our God [Elohim].” It was John the Baptist who prepared the way for Jesus. In John 1:23, he was preparing the way for the appearance of Yahweh (God).

Jesus has multiple names that are only given to deity such as Lord of Lord, Savior, Mighty God, the first and the last, Alpha and Omega, Word, Elohim, and Yahweh.

Jesus is worshipped as God

God commands in Exodus 24:14 to “not worship any other god.” In Revelation 19:10 John the apostle fell before the angel because of the wonderful revelation that had been given to him and began to worship it. The Angel rebuked John and said “Worship God.” No Angel other than Satan, or man following God would receive worship. Paul immediately told people to stop worshipping him in Acts 14. Jesus, however, never instructed anyone to stop worshipping Him but instead actively encouraged it.

Jesus was worshiped by:

(Reference: taken from Christianity According to the Bible By Ron Rhodes)

Jesus is recognized as God

5. Even Non-Christians believed Jesus was God. Pliny the Younger in 112 A.D. who was a governor and persecutor of Christians said, “They [Christians] were in the habit of meeting on a certain fixed day before it was light, when they sang in alternate verses a hymn to Christ, as to a god, and bound themselves by a solemn oath, not to do any wicked deeds…”

We can without a shadow of a doubt prove that Jesus is God, and like I said earlier, the very reason He was crucified was because of His claim to be God. 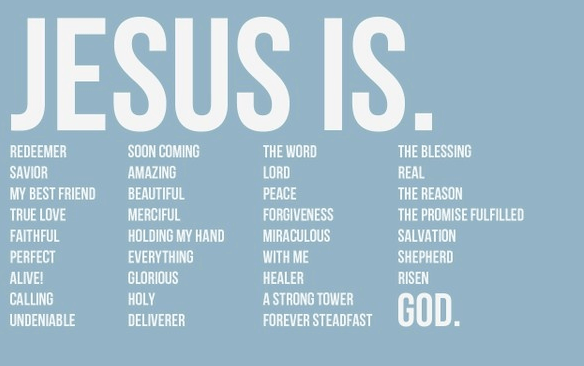